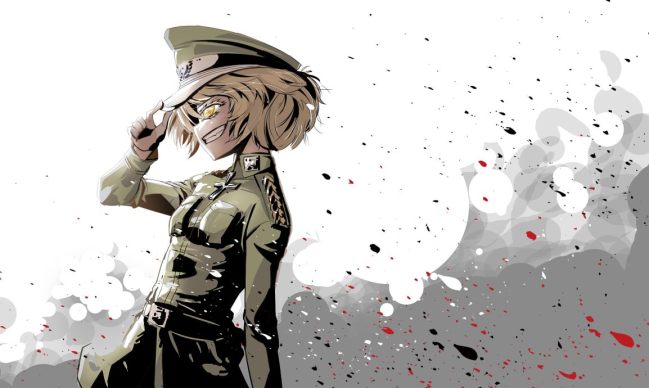 For the 99th anniversary of the Armistice that ended World War I, Podcastle in the Sky looks at two fantastical versions of that war from this year – the feature film Wonder Woman and the anime series The Saga of Tanya the Evil. Women with supernatural abilities, godlike beings engineering conflict, pop culture memory of a war from a century ago – we have all!

William: Welcome to this episode of PodCastle in the Sky. In this episode we’ll be looking at two pieces of pop culture from 2017 that deal with World War I in a fantasy way. The anime is The Saga of Tanya the Evil, also known as Youjo Senki, and the other piece is the film Wonder Woman. I’m William.

A: All right. So I would like to kick things off by actually commenting on both, because one thing I really appreciated about both of these was they both – and maybe because it was both of them are about war – but they both really bring in the idea of humanity being kind of incredibly sucky and reliant on vengeance and things like that. It seems like it’s two characters coming to terms in different ways with the worst aspects of humanity.

And Wonder Woman, she comes to the conclusion that even if humanity has a serious downside, it doesn’t matter, she’ll still fight for what is right because that is what is right. She believes that if she keeps fighting she can help humanity reach a better state, if you will.

Meanwhile, Tanya, her whole deal is essentially using humanity’s worst attributes against her enemies. Anybody who is too vengeful, anybody who is too angry, she flips it and uses it specifically to get ahead for herself only. Everything she does, even the heroic things she does for her team, are for her own benefit. I really like that both shows showed the darker side of humanity and showed what different personalities do with the discovery of that darker side.

J: Well, the thing is that Wonder Woman is a hero – a superhero – and Tanya is basically the villain. We’re watching the bad guy winning, basically, in The Saga of Tanya the Evil. Which, I can’t actually remember the last time an anime had the villain as the protagonist. END_OF_DOCUMENT_TOKEN_TO_BE_REPLACED