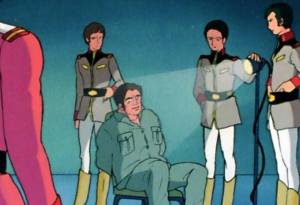 Contrary to the rumours going around the anime podcast community, no one in PodCastle in the Sky is currently being detained in Guantanamo Bay, only some of us are communists, and at worst, only half of us have ever been suspected of planning to overthrow the US government. Don’t believe everything you read online.

So what’s with the delay with releasing the latest episode? Well, your sound editor, Jesse, lives in Ontario and was distracted by the provincial elections. Also, his laptop is busted. Don’t worry, there are backups and shit. It’s just going to suck to start over at the beginning again.

Just to whet your appetites, here’s what we’ve got in the pipe:

These episodes are already recorded, they just need sound editing. For the next episode we’ll be recording we are covering the anime Run Melos and comparing it to the poem Die Burgschaft (The Hostage) by Friedrich Schiller.

Anyway, that’s what’s up with us these days. Keep it weird, listeners.